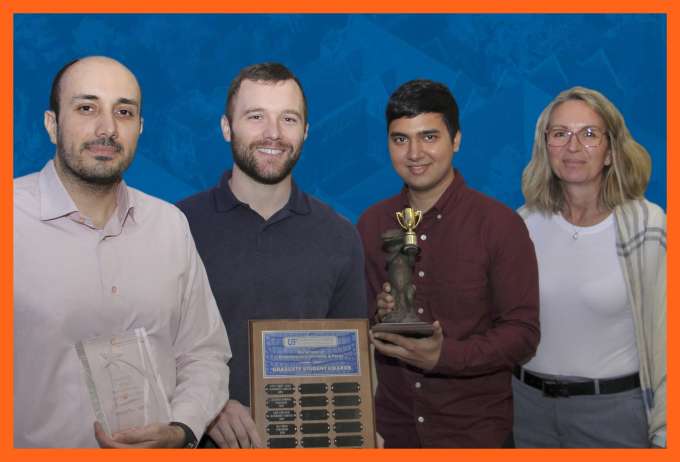 Sarayani received the “Leadership Service Award (POP Star),” meant to recognize trainees who participated in leadership and volunteer roles while maintaining excellence in their research. Sarayani had four publications during the academic year and had served as POP graduate students’ representative, UF Graduate Student Council representative to Research & Scholarship Council (Faculty Senate), Vice-president, and President of Student Chapter for the International Society of Pharmacoepidemiology and Drug Safety. The department faculty nominated him for the award, considering the impact of his research, exceptional initiatives in his leadership roles, and going “above and beyond.”

Desai received the “POP Graduate Student Publication Award,” meant to recognize a graduate student for contributions to the department and science through demonstrated excellence in publishing research and scholarly work for either a single research article or a body of work. Desai submitted five articles for consideration for this award, three of which were first-authored publications by Desai and published in high impact journals such as the Journal of Oncology Practice. He collaborated within and outside the University of Florida in different therapeutic areas with a goal to provide evidence for the value of different medical treatments. Desai mentioned how the process of publishing inculcated skills of academic writing, communication and working with different multidisciplinary teams, which eventually helped him grow as a researcher.

Sarayani and Desai were recognized with departmental awards during a reception early this year with individual trophies, a $1,000 monetary award and distinguished on a permanent plaque in the POP graduate student office.