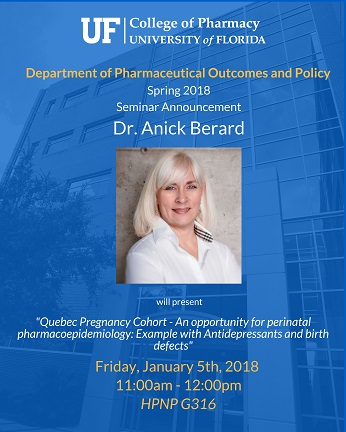 Anick Bérard’s work is on making safer medications for pregnant women to increase benefits and decrease risks to the mothers, fetus, and children. Dr. Bérard uses multiple methods and expertise to study the impact of medication use during pregnancy on the occurrence of adverse pregnancy outcomes – animal toxicology studies; pharmacogenetics; epidemiological; and pharmacoeconomics designs. Her work increases our understanding of the mechanisms involved when medications are ingested during gestation. Dr. Bérard holds the Fonds de la recherche du Quebec Santé Chair on Medications and Pregnancy; and the Louis-Boivin family research chair on « Medications, pregnancy and lactation ».

Anick Bérard obtained a Ph.D. in Epidemiology and Biostatistics from McGill University in 1999; Dr. Bérard also has a diploma in Genetics from Stanford University. From 1999-2000, Dr. Bérard conducted post-doctoral work at Harvard Medical School in Boston, and was recruited in 2000 as assistant professor at the Albert Einstein School of Medicine in New York City. In 2002, Dr. Bérard joined the Faculty of Pharmacy at the Université de Montréal and the CHU Sainte-Justine.

Anick Bérard is full professor at the Faculty of Pharmacy of the Université de Montréal; Director of the Research Unit on Medications and Pregnancy of the CHU Ste-Justine Research Center; Director of the FRQ-S Réseau Québécois de recherche sur les medicaments; Past-President of the Canadian Association for Population Therapeutics; a Fellow of the International Society of Pharmacoepidemiology; a voting member of the Teratology Society; and a member of the Research Committee of the Organisation of Teratology Information Specialists. She is the principal investigator and the director of the population-based Quebec Pregnancy Cohort, which includes information on all pregnancies (mothers and children) that occurred in Quebec since 1997-present; as well as being the co-principal investigator of the French Nation-wide Pregnancy Cohort, PregMed.

Dr. Bérard’s research program focuses on the study of the risks and benefits associated with medication exposures during pregnancy and lactation. Her major research themes focus on depression, assisted reproductive technologies, hypertension, diabetes, inflammatory diseases, and infections. Dr. Bérard has published over 500 scientific papers, abstracts and patents, and her research program is funded by the CIHR, FRQS, FDA, and the National Cancer Institute of Canada. She recently received a Most Distinguished Scientist Award from the International Teratology Society for her work on antidepressants and pregnancy.