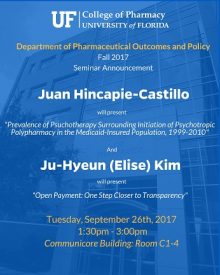 Juan Hincapie Castillo was born in Cali, Colombia. He received his Associate in Arts degree from the Florida State College in Jacksonville, Florida in 2009. He continued his education at the University of Florida where he received his Doctor of Pharmacy degree in 2013. He is a licensed pharmacist in the State of Florida. In the fall of the 2013, he started his Ph.D. in the Department of Pharmaceutical Outcomes and Policy at the University of Florida.

Juan has held several student leadership positions. Notably during his tenure at the Department of Pharmaceutical Outcomes and Policy he has served as president of the graduate students at the University of Florida College of Pharmacy, president of the Florida student chapter of the International Society of Pharmacoepidemiology (ISPE), student council chair of ISPE, member of the College of Pharmacy Dean’s Leadership Council, the Diversity and Inclusion Task Force, and the Alumni Association Committee.

Juan was appointed as a graduate fellow for the American Association of Hispanics in Higher education in 2015. He received the University of Florida Graduate Student Teaching Award and the College of Pharmacy Teaching Assistant of the Year Award in 2016. Later in 2016, he was appointed to the DuBow Family Graduate Student Education Fellowship. He received the Deborah Klapp Memorial Award in 2017.

Juan has co-authored several peer-reviewed publications including two book chapters and he has presented his research in national and international conferences. His research interests include pharmacoepidemiologic studies in pain management, substance abuse, and drug policy. His clinical specialty is management of chronic pain.

Elise is a fifth year Ph.D. student in the POP department. She is from South Korea and graduated from pharmacy school in Rhode Island. Her major area of interest is drug safety in patients with RLS and acute pancreatitis. Currently, the focus of her dissertation is on patients with rheumatoid arthritis.

You can learn more about both of our presenters and their accomplishments on their student bios, found here: http://pop.pharmacy.ufl.edu/people/students/